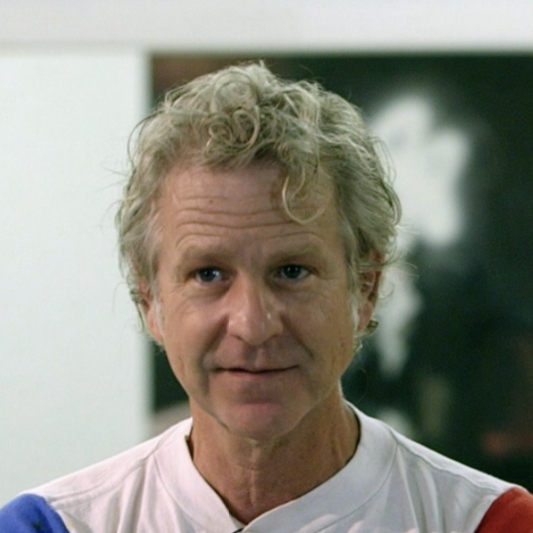 Lawrence Voytek lived and worked in close contact with Robert Rauschenberg, who he affectionately called “Bob” since the 80s up to his death in 2008. Besides being an artist himself, he offers his expertise as a consultant for the creation of museum installations. Speaking with him about the great Rauschenberg has been an immense pleasure, he opened the doors to features and personal memories of an artist that we will never be done discovering and feeling nostalgic for.

Question: You are an artist and also have been for many years a close and trusted collaborator of Robert Rauschenberg who he considered a real problem solver when he had to produce a new piece of work. How did you end up collaborating with him?

Answer: Bob was famous for being a collaborator. I was amazed when I started working for Bob. I had gone to fine schools and Bob had always been my favourite artist. Eventually he looked at my portfolio and he loved my work. He told me: “I need you to help me produce my life’s dreams.” I just knew helping Bob was what I had to do.

Q: “Bob” is said to have been dyslexic and thanks to this peculiarity, which for many people could be a difficulty, he was able to visualise images which he then translated into magnificent artworks. Do you have a special memory of this?

A: Bob was a visual thinker. His power was being dyslexic: he could see things in different ways. I remember how he used to work on a big table, walking on it and around it in order to create his paintings, lying flat. Once the paintings were done, I would hold up the frames in order for him to mount the paintings in. Finally, the paintings would be hung onto the wall. Somehow, they always looked perfectly balanced: lights, shadows, colours, intensity.

It was simply amazing how he could see.

Q: He was very close friends with another great artist, Jasper Johns: did their art influence each other? In what way?

A: Bob used to talk a lot about Jasper. I had the fortune of meeting Jasper at quite a few of Bob’s openings. I remember always enjoying our talks. The best thing that happened during their relationship was that they gave each other the permission to do what they wanted to do in both life and art. To me the work they were doing whilst they were together is definitely one of my favourites. I still can see Bob in John’s work and John in Bob’s. I was told by Bob that Jasper had shared with him the dream of painting the American flag. And so they did. Bob would tell me through the years that when he had a dream, he would realise it too.

Q: In 1975, Bob took a trip to India and then said he was fascinated by the beauty and nothingness of the people there. Is it true that he only started using the colour purple after that trip?

A: I don’t know about this statement. He did talk about the amazing beauty of India indeed. He talked to me about people in fascinating fabrics, silks, flowing colours. After his trip to India, Bob started creating “flammers”:  fabrics floating in air. I think India is where the magic of fabric grabbed his attention.

Q: What is the most beautiful memory you have of the time of your life you lived with him? How has Bob’s work and the collaboration with him influenced your artistic work?

A: It is hard when so many memories are so beautiful. Major openings around the world, but little memories of specialness. 26 years, 340 days a year there has never been a day where I did not want to go out to work and see Bob: this is the last thing that Bob told me. He was dying.

I also remember that when Bob was on deathbed, he still wanted to be out on Captiva. For this reason, Bob’s doctor decided to set up an ICU unit in Bob’s studio, so that he could work on his art. Bob was having multiple organ failures. Nevertheless, I encouraged Bob to try to keep creating new beautiful art. I suggested him to create a table that would tilt up to the wall, so that he could point to me where to put the image. I thought it would make too much noise if I cut the image out and welded it, but the last thing he said to me instead was: “music”. That table will always remind me of him. That one table I made for him.